Well they've kept this one close to their chests. A previously unreleased studio session recorded by the classic quartet for Impulse on the 6th March 1963 is getting a release on June 29th.

In recent years 'new' Coltrane albums have been repackaged material or live recordings which have generally been in circulation among collectors for years. Only one track from this session ('Vilia') has ever been released, and it includes a couple of previously unknown compositions, as well as studio versions of 'One Up, One Down' previously only known from a Feb 1963 radio broadcast from Birdland. Source is Coltrane's copy of the tapes which he apparently gave to his first wife Naima.

The official announcement is due later today but looking at some etailer sites which have already posted details it looks like there will be both single CD and vinyl album versions, and deluxe two disc editions with alternate takes (plus digital downloads of course). The deluxe 2CD track listing as given here :

Stories in today's Guardian and with a little more background detail the New York Times.

well, this is good news.

Was reading about this earlier. Very exciting.

There was a short item about John and Alice Coltrane on the R4 Today programme which includes interview snippets with Ravi Coltrane about this release and a couple of tempting fragments in the background from 'Nature Boy' and 'Slow Blues'.

Mp3 here - open in a new tab to play.
https://my.mixtape.moe/lnfqqa.mp3


Putting my 'fat controller' trainspotters hat on : Apparently in 2005 Naima Coltrane's family tried to auction the collection of 35 reel to reel recordings they possessed. The auction was blocked by Verve as most were Coltrane's copies of sessions recorded for Impulse. There matters remained until whatever deal over this tape was struck last year.

Barry Kernfeld had been given access to the tapes in order to write a description for the auction catalogue. His account of the contents of the tapes was subsequently published in a Dutch journal and used to be on the web (but is archived here).

His description provided much of the detail for the relevant bits of the sessionography in The John Coltrane Reference Book, although for some reason that book claims Jimmy Garrison sits this track out (the only known take of this untitled composition). Which he clearly doesn't.

Be nice if this release meant that some of the other material Kernfeld describes is forthcoming.

Lurdan said:
Barry Kernfeld had been given access to the tapes in order to write a description for the auction catalogue. His account of the contents of the tapes was subsequently published in a Dutch journal and used to be on the web (but is archived here).
Click to expand...

this is a mouthwatering essay. thanks for the link.

Another six tracks now available on the JohnColtraneVEVO youtube channel

This is amazing news.
I shall listen this evening as the sun goes down.

Oh how I wish that some lost Charlie Parker was suddenly found ! 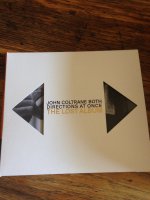 Particularly like 'Untitled 11386' and 'One Up, One Down'. I've had all the versions of the latter on rotation for the last hour and a half while I try to decide to what extent it's an ancestor of 'Transition'. Better give the neighbours a break I guess

This article is good

Ive got the coltrane/hartman album on - totally different beast innit?

killer b said:
Ive got the coltrane/hartman album on - totally different beast innit?
Click to expand...

Completely. Do you know the Ballads album? Also excellent.