Sweet when you stir it up

Of these the two you probably don't know but should check out are the Rogerio Duprat and the Chico Buarque.

My top 30 (as compiler, I don't have to bother with tedious things like correct spelling or owt)

There was a reasonable clear next ten as well -

How many submissions did you get belboid ? I always assume a couple of highly placed rankings would be enough to get an album onto the list, but the absence of Brotzmann suggests otherwise...
K

Left it a bit late and ran out of steam towards the end so only managed 14. Should have put Nico, Silver Apples and others in there. Had Cheap Thrills quite high up despite not particularly liking Janis Joplin's voice, James Gurley's one foot in the garage/one foot in outer space pyrotechnics on the other hand - if ever there was a genius in the wrong band etc...

killer b said:
How many submissions did you get belboid ? I always assume a couple of highly placed rankings would be enough to get an album onto the list, but the absence of Brotzmann suggests otherwise...
Click to expand...

I hadnt heard of that Nancy & Lee album...just played a track off it now, its

. Reminding me of italian westerns.....
eta
as Belboid said, some velvet morning is a definite highlight.
not that sure about the rest though!
K

Sweet when you stir it up

Embarrassed to say that I have never listened to Cheep Thrills and its the sort of thing I like too.

Knotted said:
Embarrassed to say that I have never listened to Cheep Thrills and its the sort of thing I like too.
Click to expand... 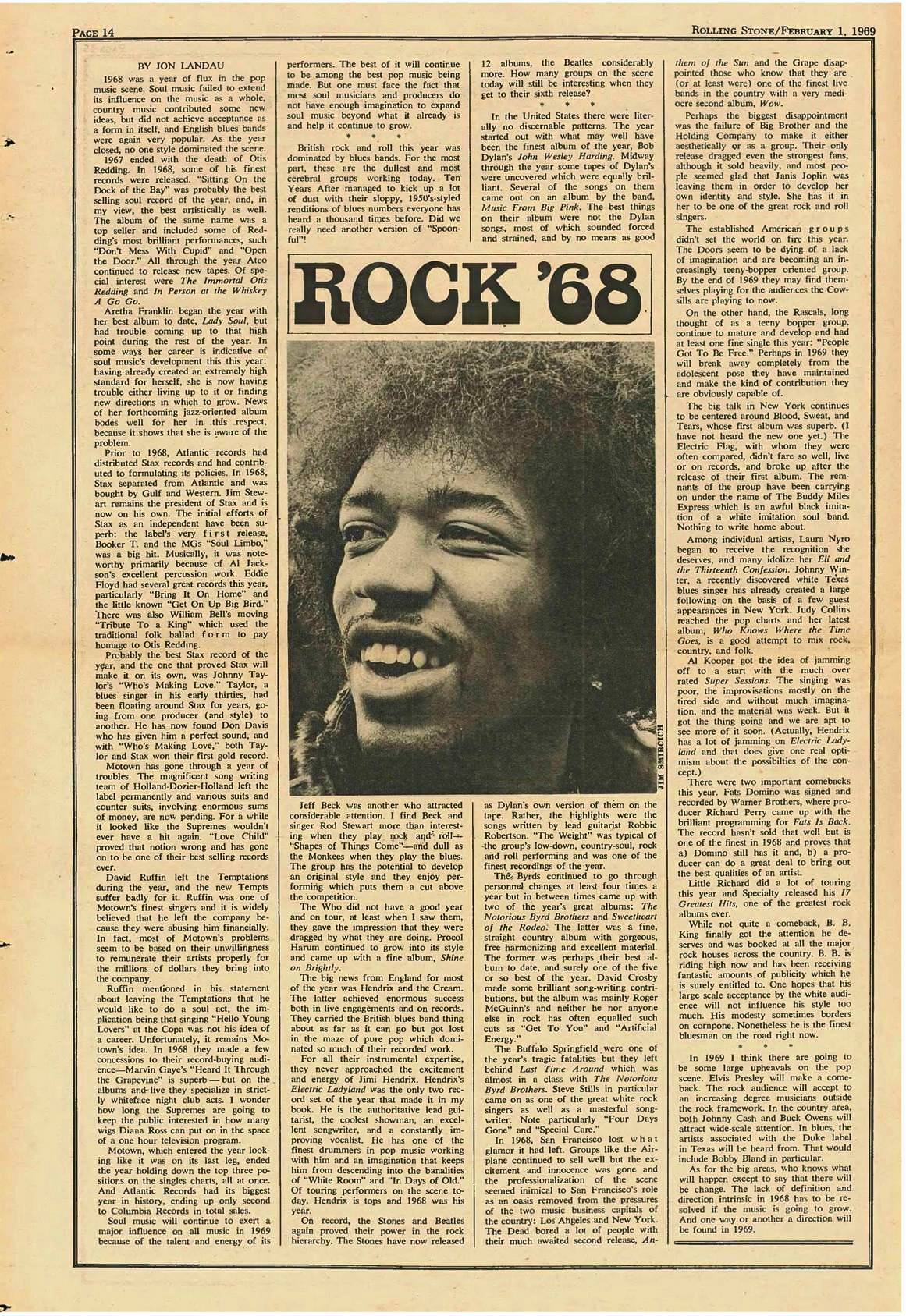 "Perhaps the biggest disappointment was the failure of Big Brother and the Holding Company to make it either aesthetically or as a group. Their only release dragged even the strongest fans, although it sold heavily, and most people seemed glad that Janis Joplin was leaving them in order to develop her own identity and style. She has it in her to be one of the great rock and roll singers."

The Rolling Stones - Beggars Banquet
Silver Apples - Silver Apples
The Doors - Waiting For The Sun
The United States Of America - The United States Of America
The Jimi Hendrix Experience - Electric Ladyland
Sly And The Family Stone - Dance To The Music
Dr. John, The Night Tripper - Gris-Gris
Donovan - The Hurdy Gurdy Man
Van Morrison - Astral Weeks
Iron Butterfly - In-A-Gadda-Da-Vida
The Byrds - Sweetheart Of The Rodeo
Steppenwolf - The Second
Desmond Dekker - Intensify
Pandit Prannath - Earth Groove - would of been higher but for the poor recording plus it's the only track I've heard where the musician stops to blow their nose.
Jacques Loussier - Tu Seras Terriblement Gentille - his soundtrack for Dark Of The Sun from 1968 is great too
David Axelrod - Song Of Innocence
The Mohawks - The Champ
Gabor Szabo - Dreams
Fred Weinberg - The Weinberg Method of Non-Synthetic Electronic Rock
Claudine Longet - Love Is Blue

ska invita said:
I hadnt heard of that Nancy & Lee album...just played a track off it now, its

. Reminding me of italian westerns.....
eta
as Belboid said, some velvet morning is a definite highlight.
not that sure about the rest though!
Click to expand...

There are some great covers of it too, I particularly like the Rowland Howard & Lydia Lunch.

Not sure if anyone would dare cover it these days, it's not exactly feminist.

belboid said:
Not sure if anyone would dare cover it these days, it's not exactly feminist.
Click to expand...

i dont understand them!

ska invita said:
i dont understand them!
Click to expand...

I dread to think about what 'I'm gonna open up your gate' means. And as for Phaedra....the first person to make false allegations of rape....

belboid said:
There are some great covers of it too, I particularly like the Rowland Howard & Lydia Lunch.

Not sure if anyone would dare cover it these days, it's not exactly feminist.
Click to expand...

Primal scream did a cover not that long ago I think

Kind of kicking myself about not including this

Interesting list(s). Plenty there I haven't heard before, in some cases never even heard of...

I'm away on holiday ATM, but I'll dig out my twenty picks when I return in a few days.

Well done Urban. That's a much better list than for '67

1. Hank Ballard ‎– You Can't Keep A Good Man Down

Mr Hank Ballard: The man who wrote The Twist - Chubby Checker’s cover that got all the attention came a year after Ballard’s. By the late 60s his career was on the wane, so his friend James Brown, who was at the peak of his success, produced this album for him. It’s one of the best funk albums of the 60s, it’s sound pointing the direction JB took into the early 70s. Seriously, if you got any interest in funk, go listen to this.

Latin Soul: a cross-over between latin and soul music that briefly flourished in the mid-60s before being blasted away by the Salsa explosion of the 70s (which really began in 68). Some of the tracks lean more towards latin, some more towards soul. The bassline on that title track – oh yeah - and when the piano drops at the 4 minute mark! This is my favourite album from the scene.

The Queen of Soul at the top of her game: Think, I Say a Little Prayer, See Saw. Number 6 on the poll is pretty good for a soul album on Urban.

One of two Gainsbourg albums in 68, this one shares some of the tracks with Bonnie & Clyde (the title track, Comic Strip, Dr Jekyll Et Monsieur Hyde) but it’s the better album. And, it has Initials BB on it – the best thing Gainbourg ever did.

Studio One rocksteady. All sweet vocal harmonies and hip shaking basslines. Love it.

Why the surprise? It’s a great album. Sinatra’s bright-eyed singing and Hazelwood’s world-weary cowboy vocals work together fantastically, and the production is amazing. My 5 year old loves this album, so it’s one of my most played of the last few years – when she asked repeatedly and at length about the lyrics I had to think fast sometimes. People always go on about Some Velvet Morning, but Summer Wine is loads better to my ears and my favourite thing she did.

Willie Colon, and vocalist Hector Lavoe, were two of the biggest NY Salsa stars of the 70s. Their huge hits in the 70s were all virtuoso singing, flawless playing and polished production (made in a blizzard of cocaine). On this, their first album, their sound is much rawer and (to my ears) all the better for it.

Another Latin Soul album. Opening track It’s a Good Feeling (Riot) is so amazing that it almost overshadows the rest of the album. Almost, but not quite as the rest is great too.

More Latin Soul. It was hard to place this album on the list. The A-side is fantastic: opener Take a Trip is one of my favourite tracks of the kind and the rest of the side continues in similar style (if you can excuse some of the lyrics, which are – to be polite – ‘of their time’). I skip the B-side.

Some confusion if this is 67 or 68 – I think it’s recorded in 67 and released in 68, but since I didn’t vote for it last year and I doubt anyone else voted for it, fuck it, what does it matter? Bernard ‘Pretty’ Purdie was a session drummer who played with a lot of big names – James Brown, King Curtis, Aretha Frankiln (he played drums on Rock Steady). This album is obviously very percussive, but with some funk bass and horns thrown in it’s a stripped-down funk classic.

11. James Brown And The Famous Flames ‎– I Can't Stand Myself When You Touch Me

Did we agree there were 6 James Brown albums released in 68? Tough call, but I went for this as my favourite.

Yeah, you know the title track. It’s been sampled over 657 times by everyone from Eric B & Rakim (Paid in Full) to Ina Kamoze (Here Comes the Hotstepper) to Janelle Monae. That doesn’t stop the original being a funk classic in it’s own right and the whole album being great.

Steppenwolf >>>>>>>>>>>>> every other rock band in 68. They released two albums this year: the first one has Born to Be Wild on it, but this is a better album. Most of the B-side runs together into one long, great medley climaxing in the double headed freak out of Hodge, Podge, Strained Through a Leslie and Resurrection. And it's the one with Magic Carpet Ride on it

Moving away from the Latin Soul of their previous album towards straight up salsa (expect on the fantastic Horsin’ Up), it sums up where latin music was coming from and going to in NY in 68.

Here's my 20 favourites from the year, in alphabetical order of title rather than attempting to rank them. Not much point in declaring Astral Weeks 'better' than Machine Gun, or White Light/White Heat 'better' than Scott 2

Mine, in order, no real surprises I guess. I didn't even manage to find time to listen to Machine Gun and now wish I had spent the time checking out Astral Weeks on that: