A leading bookmaker has suspended betting on Tottenham's Argentine boss Mauricio Pochettino, 47, leaving before the end of September.
Click to expand...

Paris St-Germain want Tottenham's Denmark midfielder Christian Eriksen, 27, as a replacement for Brazilian Neymar, who is close to returning to Barcelona. (Le Parisien - in French)

I can't see Poch going anywhere other than Real or Psg, and both those jobs aren't available for the time being.
Wouldn't be too disappointed if Erikssen went, he's looked uninterested for a while now, but losing Super Jan would be a blow.
It's been pretty poor football for a while, doesn't help having the highest paid chairman in the premier league not wanting to spend any money on anything other than his shopping centre project.

Big 6pt game today then. NL Derby always a big deal of course, but Spurs really need a win or likely will be bottom half by close of the day.

Yeah. It is a bit troubling.

Not much love for Levy and Poch seems to be fed up which must be affecting the dressing room.

Bottom half means nothing after 4 games. What does matter is 8 points off the top, 6 off City and behind the teams who should be our direct rivals (the other 3 and potentially the likes of Leicester, Everton, Wolves who at least harbour ambitions of breaking into the top 6).

Liverpool and City will barely drop 15 points all season, while it's a bit optimistic to say we should be challenging them for the title we should be looking to be in the conversation for as long as possible - as we were last season, only 5 points or so well after halfway (I seem to remember being 2 points back after 23ish games but games in hand mess with that particular memory).

The Newcastle game was a massive fuck up, it's a "pools panel home win" every time but we didn't show up and they earned it. If we were on 7 points from 9 including away at City there's no talk of a crisis, quite the opposite - so yeah, we fucked up but it's only 1 game and everyone will have their fuck up at some point (Crystal Palace, 3-2 at the Etihad anyone?).

Just got to make sure it is only the one game then...

There's something rotten in the state of tottenham

One out all out

I am expecting an ill tempered, injury filled, goalless draw with both managers sent to the stands hoping the sport of football is the winner today.

Man for man we're better than them - they have potentially a great front 3 but they haven't all played together yet, midfield is decent but more functional than exciting, and their defence is poor.

Our defence is up to task (especially if Vertonghen plays). Midfield we'll miss Ndombele but Winks and Sissoko can hold their own, ably assisted by (hopefully) Eriksen and/or Dele. We should create chances and with Lucas, Son and Kane available should stick one or two away.

As ever on derby day though, it's less about who is better and more about who wins more of the battles.

A draw would not surprise. I suppose it depends which (of either) team turns up today.

My stream seems to be about 2 mins slow, so I'd appreciate if you could all factor in an appropriate delay before announcing anything important.

(Source: as stated in image)​
The Harry Kane conundrum: What happens when your best player doesn’t suit your best system?

Leicester match...that VAR decision against Spurs has got my heart rate up, fuck me, what a terrible decision. Supposedly it took three minutes to arrive at. They're clearly level..the spirit of the rule is to stop goal hanging...disallowing that goal is disgraceful.
Fair play to Maddison who scored the winner though, it was a really well taken goal fuelled by pure adrenalin.
arse

It was marginal for sure. Leicester also had one disallowed but that one was a bit more black and white.

maybe a draw at best 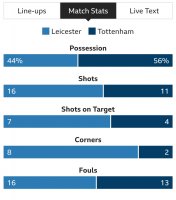 Saving yourselves for the league Champions League.

that was not the plan was it?

lol - got to hit the bottom before you bounce back! 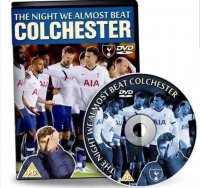 I cant reveal the source but it appears there's 'Terry vs Bridge' scenario between Vert and Eriksen, with Kane taking Eriksens side. Poch can't solve the issue which might be why he's making comments about not being mentally prepared and sticking to the game plan type comments at the moment...