The tomcat's right to roam

The first time it happened I as worried sick and though I’d lost him. I only found out because of the tag what had been going on.

Lost in the wood

My mate’s cat was putting on weight despite being on a diet until he discovered that his neighbour was feeding him pork pies. A quick (kindly) word and the pie feeding stopped.
Our two fellas are well known and loved by our neighbours. I get frequent reports of how they’ve chased away foxes and killed vermin - actions that get them rewards. One neighbour feeds them fish tails at 4pm every Friday and another gives them the occasional saucer of milk. They have asked my permission to do this. I like the idea that my cats are active members of the community.

If people don't want other people's cats in their home, they should put a lock on the door.

In the top 97% of Urban's most interesting posters

What if it's a Vampire Cat?

I once saw a post on Facebook of someone angrily asking local people if they could stop their cats shitting in her garden!

That was a long funny thread....

I wouldn't care if someone let my cats enter their house but I'd be annoyed if they fed them as that's veering into cat stealing territory. Also if feeding a strangers cat you have no idea if you could be causing it harm.

Saul Goodman said:
Do you live in South Korea?

one of Maxwell's demons

As others have said, it's all fine as long as they don't feed the cat without asking first. Locking the cat in for the night is totally out of order.

I always thought of my cat as being independent when he was out. He could do what he wanted, go where he wanted, befriend whomever he wanted (he didn't like strangers, though, so was safe on the last bit).

Cats do 'move house' sometimes. If your cat prefers life somewhere else, you should probably let it go. Have known a couple of people who got a cat that way, both times from an owner who didn't much want the cat.

tbh cats aren't that difficult to keep. If your cat ends up wanting to move out, you're probably not really cut out for keeping them.

andysays said:
If people don't want other people's cats in their home, they should put a lock on the door.
Click to expand...

I recommend reading the thread before responding. 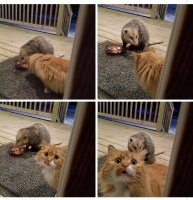 There are loads of unwanted cats, if you want a pet get one of them.
C

2 of my adult offspring get regular visits from neighbourhood cats. While they don't go so far as feeding them, they (the offspring) definitely act as though they are somehow superior, being the 'chosen ones' of a cat. I find this attitude stupefying myself and keep a handy Nerf gun since word has got around the neighbourhood that I have an exceptionally cowardly collie who can be terrorised by cats idling on the back wall.
Back in my cat -owning (pre-gardening) days, I had a horrible bullying tom who broke into other people's houses and stole other cat's dinners with added violence. Even after the snip. After my cat hooked an eye out of next door's cat, I stuffed him into a large box and cycled off to a nurses home outside town where I deposited the maniac cat (along with a huge amount of scattered meats)...and hoped a feral life with caring nurses was an adequate compensation for both his bollocks and a life of urban roguery
You must log in or register to reply here.
Share:
Facebook Twitter Reddit WhatsApp Email Link
Top