The dog thread is better than the cat thread, because it features dogs.

I've started taking Willow running with me. It's mostly positive. Except when she ran into a field full of horses and started running circles round them barking loudly. Luckily they were pretty chilled horses. 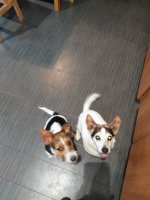 Whoa! She's really grown. She hasn't got a tiny puppy face any more.

mlem to you too fella x

Look at this tart.

Something is wrong with my dog

Turn it off and turn it on again?

This is good news - the law will be changed to ban puppy and kitten farming.

Puppy and kitten farming to be banned under 'Lucy's law'

The buttercups are out

Throw me the stick. Again. Seriously. It's like she can't actually tire of this game. OH had her work all day and many were thrown and we were sat out the front drinking and she just keeps going... 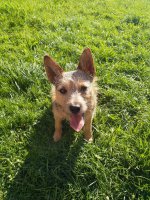 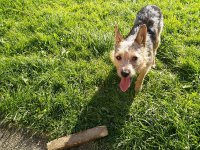 I am often reminded of this comic 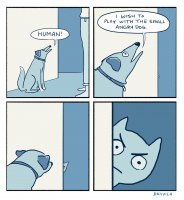 Waiting for a paw from above... 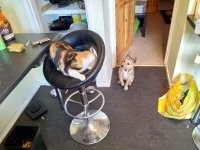 Because I could not stop for death

First, apologies for linking to the DM but other links are to Facebook or Twitter or similar.

Look up bosco and his big stick. Those of us who know Dachshund will recognise the attitude.

UnderAnOpenSky said:
I am often reminded of this comic

Waiting for a paw from above...

That very scene is taking place in my bedroom at present. Cat on bed. Dog on floor but desperate to be in bed with the cat. She’ll get distracted by her tail eventually

Took the hound to see my eldest at work. She gave him an icecream with bonio in place of a flake

Because I could not stop for death

I am thinking about tick collars since I have just pulled 2 ticks off Hazel - unlikely to be the last. I generally use a spot-on treatment every 4 weeks (Fipronil is the active ingredient for ticks...but wanted a longer term preventative. The Bayer Sereneto (I think) gets good reviews...but as always, hard to balance the real risk of |Lymes against hardcore chemical treatments.
Anyone else used a tick/flea collar (although fleas are the least of my worries since they are easy to stay on top of with a comb).
K

We were in Wales last week. We were pulling about 6-10 ticks off Ted a day. I’ve never known anything like it. 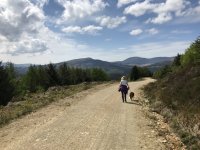 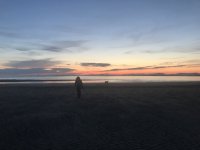 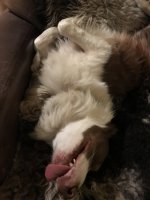 The little bastard gave us a hell of a fright though when he disappeared for eight hours.

We were staying in an utterly remote cottage on the edge of Cadr Idris mountain, with nothing but forestry and sheep farming around us. We thought the garden was secure but Ted discovered otherwise between 8:45am and 9am on Wednesday 8 May. We spent the next 8 hours climbing and driving around the area, speaking to local farmers (and estate agents) and contacting pet search services, which required driving into town, through 10 gates each way and an hour’s round trip. Three times because we kept going back to the house to check if he was there.

Then we returned to the house again at 5pm, hoping he was waiting by the front door. He wasn’t, hearts sank. And then a little worried face peeped around the corner of the house. Ted was totally filthy and overjoyed to see us. “I’ve had a hell of a day,” he told us. “Really.” We responded.

kabbes said:
We were in Wales last week. We were pulling about 6-10 ticks off Ted a day. I’ve never known anything like it.
Click to expand...

My farmer neighbour and his dog both got Lyme disease a couple of years ago - the dog almost died and is still a bit shonky, 2 years on. Norfolk is up there, with Wales and New Forest for ticks and preponderance of Lymes so I am deeply worried, given the amount of time we spend in the woods. I have used Fipronil since Hazel was a pup and fear growing resistance (which definitely happened with older iterations of Frontline). It is easy to see if humans have been infected by a tick bite, but dogs, less so...and it can be hard to diagnose, some weeks and months after the actual bite. I might have to dig deep, swallow my distaste for Bayer/Monsanto and buy their expensive (£35+) tick collar.

Just had a call from the vet to say that Pepper's liver is fine after her Xylitol adventures, which is a massive relief.

This photo made me a bit tearful...

The best news photos of the week

I will endeavour to train him to be a stick carrier

Be who you needed when you were younger

Farewell to Pru. The slab of Lab. Living Stone, first of her name. Fourteen years, in too much pain. We held your head as you slipped away. Thank you for your love, loyalty and disgusting habits. Living Stone now rests.