Manchester United 19/20: You can't win anything with kids (revisited)

Hopefully struggling for top 6 won't cost him his job.

Important we get off to a good start by winning today.

AverageJoe said:
It'll be a draw. Goals, but a draw
Click to expand...

From the other thread. I'm with this but will stick at a nervy 1-1.

Title challenge is on

Badgers said:
Title challenge is on
Click to expand...

How good is Wan Bissaka you lot got a real star in the making. 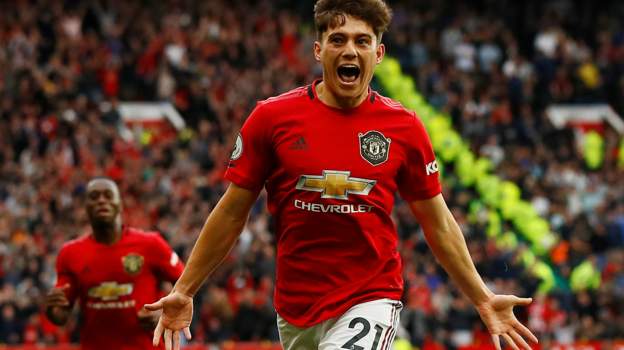 Wow, the battle for fourth place is on!
J

Amid the analysis following the game yesterday one thing went unremarked. Maguire drew high praise for his performance as did his partner Lindelof. Even though they had never played together before, for the first time in a very long time, the centre of defence already looked balanced.

One possible reason for this is that though both of them are naturally right-footed, Maguire prefers to play on the left hand side. Which is a position Lindelof has often occupied himself. Although not through choice. Ideally he best suited and visibly more accomplished playing on the right, but was forced to sacrifice his own game for the overall benefit of the team.

So in securing Maguire's transfer, Ole has in reality secured a vital partnership and a significant upgrade in not one but two positions. And given that both are only in or around their mid-20's, £80 million has to be regarded as a snip.
Last edited: Aug 12, 2019

I'm more surprised people still use PowerPoint, to be honest.

Been a fair bit of amusing #OleOut stuff on social media but this shit directed at Pogba is really bad to see. Been a bit too much of this stuff of late

Yes social media is a problem but the mainstream media need to take a look at themselves to see how they stoke this shit.

Black players seem to take a lot of unfair criticism from these cunts on the TV, radio and in the papers I'm thinking Sterling, Balotelli, Sturridge, Ashley Cole as well as Pogba. Gary Neville spent virtually the entire post match analysis talking about that fucking penalty. See the face on Souness every time he does a united game - last season at points he was on the verge of going apoplectic, I'm just waiting til he goes full Ron Atkinson.

Last season it was constant moaning about his Instagram, his hair, him being lazy even though he had by far the best stats of all United players. I heard loads of criticism of Pogba last year but I didn't see anything like that level of analysis on the performances of the rest of the players even though they were all utter shit.

A world full of cunts and no mistake

I had a quick look at some of those tweets that called Pogba a n*gg*r or at least put the two words in a tweet and quite a few were either from posters with a black photo or people professing to be from Africa.

Crystal Palace record their first victory at Old Trafford in over 30 years.

Pathetic. What a monumental mistake to give this job to this clueless Norwegian. Does he really think rashford or Martial will get 20 goals a season?
No goal scoring midfielder added to the squad. James may get the occasional goal but that's it.
No forward added.

Should have gone for Pohchiteknow.

Climbing up the aerial

Badgers said:
Ole tactics were a bit odd bringing on three subs in the last ten mins was a bit odd

Been a fair bit of amusing #OleOut stuff on social media but this shit directed at Pogba is really bad to see. Been a bit too much of this stuff of late

The commentators on talksport were saying that Pogba got a very strong reception from the real supporters in the stands and would respond to that in the same way that Tammy Abraham did earlier today. Oh well.

And wheres GarveyLives cut n paste from the S*n or is it just Chelsea he follows.

Ibrahimovic back in Jan anyone?

Badgers said:
Ibrahimovic back in Jan anyone?
Click to expand...

The diffrenve between the have and the have nots in football. At the same time Bury FC have gone out of business , Man Utd are having to pay Inter Milan £150k a week to take Sanchez.
Anyway here's Sanchez's best performance for Man Utd

What sort of loan 'deal' is this?

Badgers said:
What sort of loan 'deal' is this?
Click to expand...

Indeed. Also costs over £15m (I think) for no player at all

Badgers said:
Indeed. Also costs over £15m (I think) for no player at all
Click to expand...

Yeah it'd be better to have got rid completely sure.

chilango said:
Yeah it'd be better to have got rid completely sure.
Click to expand...