Love and Rockets is back! 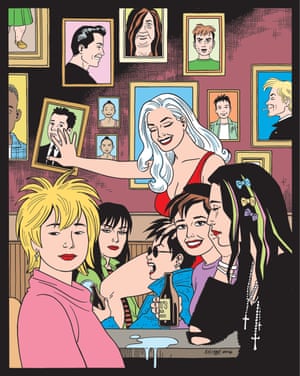 I LOVE this comic. Great to have it coming back.

It has been described as “the comic book event of 2016” by the leading trade journal, Previews. Yet there are no spandex-wrapped super soldiers in Vol IV No 1 of Love and Rockets, dated July 2016, though actually on sale 28 September. Instead, the comic, returning to newsstands on its 35th anniversary, continues its long-running, critically acclaimed stories of ageing southern Californian punks and bizarre central American villagers.

Rolling Stone ranked Love and Rockets as the greatest non-superhero graphic novel of all time, likening it to the Clash, REM and Run-DMC. Time magazine, meanwhile, included its creators, the Latino-American brothers Jaime and Gilbert Hernandez, in its top 100 21st century innovators.

Jaime and Gilbert (third co-founder Mario Hernandez ceased involvement some years ago) have written and drawn the strips since 1981, though the title, like the brothers’ tales, has altered a bit over time. Love and Rockets went on hiatus towards the end of the 90s, and has switched formats, spending the last few years as a 100-page annual. Now it returns as a semi-regular, magazine-sized 8 ½” x 10 ¾” comic, the very dimensions as the Hernandez brothers first favoured when they launched the title, using a $700 loan from their little brother.

Love and Rockets rides again: 'we influenced a whole lot of cartoonists'
Click to expand...

Thirty-eight years have gone by, and Los Bros Hernandez, as they are known (principally Gilbert and Jaime), are now regarded as maestros of the comic book form. Some of the narratives they established in that first unlikely booklet are still going strong.

This month, Jaime is releasing “Is This How You See Me?” in hardback. It reunites Maggie and Hopey — now solidly in middle age — at a punk concert in fictional Hoppers (a stand-in for Oxnard). Almost four decades on, Maggie remains an impetuous romantic with a penchant for infatuation. Hopey, the take-no-prisoners punk, has sacrificed adventure for predictability. All these years later, the tangled relationship between these women still crackles.
Click to expand...

editor said:
I LOVE this comic.
Click to expand...

Yeah I love this comic too. I've been following it since about 1989 and I'm looking forward to reading Is This How You See Me?

The Death of Speedy is one of the best stories I've read, comic or otherwise. The way trivial events build on top of each other leading to tragedy is the kind of storytelling most writers would kill for.

And he's mostly kept the quality up. The Love Bunglers from a few years ago is amazing.

Recently got into comics in general and have picked up the first two volumes of this. Certainly looks interesting.
R

Yep this is great, I got took out all the ones they had in the local library to read over the years... still have a lot of gaps to fill. I quite liked not reading them chronologically, just picking them at random.

Love and Rockets are my favourite graphic novels. I love the way Jaime and Gilbert draw people, specially women because it is so diverse. Love how the characters age and change. I love the way sex is drawn. I love the surrealism.
At some point I will get a love and rockets tatoo-...
You must log in or register to reply here.
Share:
Facebook Twitter Reddit WhatsApp Email Link
Top