Kick Racism Out of Football

skyscraper101 said:
If I was singling out Chelsea, it wasn’t to tar all fans with the racist brush, it was merely to point out that he’s doing no favours to the image of Chelsea fans that many people still have of headhunters, combat18 and those twats on the Paris metro.

Someone with a front row season ticket, who’s aware he shows up on telly often, should be a bit brighter than this.
Click to expand...

Perhaps its worth remembering the Independent Chelsea Supporters who did combat the Headhunters and who got glassed and stabbed for their efforts. They are still there .

The39thStep said:
Perhaps its worth remembering the Independent Chelsea Supporters who did combat the Headhunters and who got glassed and stabbed for their efforts. They are still there .
Click to expand...

It’s all commendable. Every effort is to rid the game of this stuff. I’m genuinely not having a go at Chelsea here, this guy is just making an example of a wider problem. But he should’ve been aware of the bigger picture with regards to his own club’s history. This chest thumping hostility to rival players and rival fans just, because they’re ‘the enemy’ - what bullshit. Sure criticise players for diving, feigning injury, being lazy, etc..but anyone shouting abuse at a player just because he plays for a rival team, and happens to be picking up a ball nearby is a fuckwit.

I know it only represents a fraction of fans, but it’s prevalent enough in the wider game to put me off. I hear it in pubs all the time. Twats screaming obscenities at players on the screen. It’s ridiculous. Not to mention all the other reasons for disliking modern football.

That said, I love many other things about football. The back to basics of the non league teams, the rise of the professional women’s game, the growth In popularity in the USA, The World Cup... etc. But I’m just done with top tier league football. I’m done with the homophobia, the sexism, lad-ism, the leary ‘bantz’ and the screaming of things like ‘Manc Cunt’ (If indeed that’s what he said as he claims). It’s all too stupid. I’m done with it, for now at least.
Last edited: Dec 12, 2018
G

hash tag said:
It's not like Chelsea people to be known For their racism

It's not like Chelsea people to be known For their racism 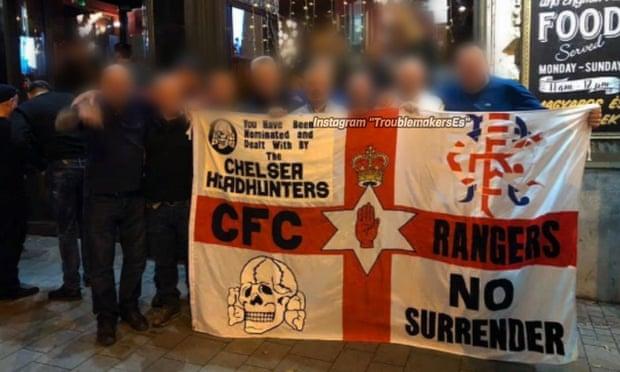 "The banner, a modified flag of Northern Ireland that also mentioned Rangers and bore the Loyalist slogan “No surrender”, featured the SS-Totenkopf skull commonly used by neo-Nazis as a reference to the Third Reich’s units who ran extermination camps throughout Europe and the 3rd SS Panzer division.

The top left segment of the flag contained the message: “You have been nominated and dealt with by the Chelsea Headhunters”. The hooligan firm was notorious through the 1970s and 1980s, when violence in and around football matches was arguably at its height, and had links to groups such as the neo-Nazi Combat 18 and the far-right National Front, as well as to Northern Irish loyalist paramilitary organisations."
​
(Source: The Guardian)
G

GarveyLives said:
A most unfortunate development for Mr Wing and his fledging campaign to portray himself as a 'victim':

... I think I can see why people don't want some of the individuals involved in this sort of behaviour to have to their details identified ...

We're beginning to get your message.​

I'm not checking that link....it just gets worse

This is really worthy of being shared. Absolute respect to John Barnes here.

I forget how much of a nice guy JB is; thanks for the reminder.

Yeah. While we're on the subject though...
WATCH: Ugly scenes in Brighton as violence breaks out ahead of Albion vs Palace | The Argus
G

There is a really foul stench around this particular institution ...

Something positive to help for a change, besides, a bit of curry at half time 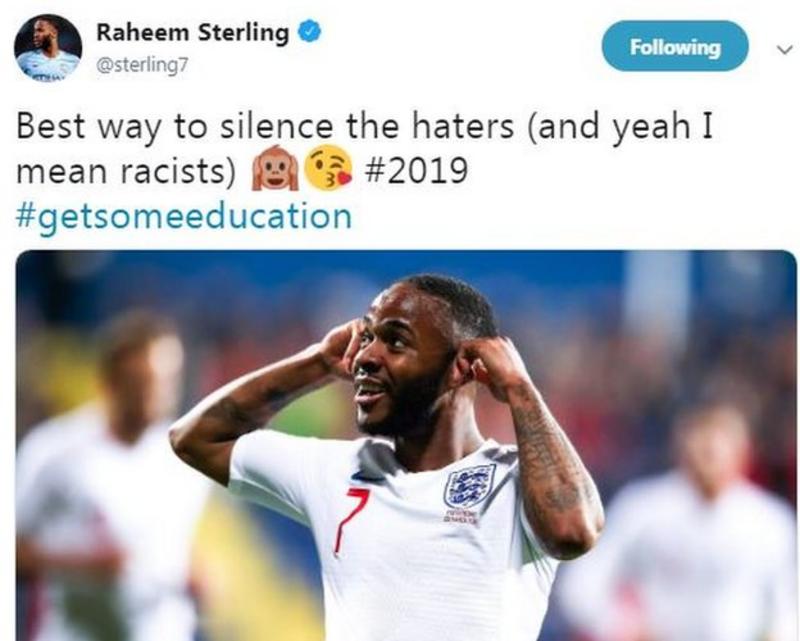 "Firstly, very sad. We had an excellent performance and we've got an 18-year-old being interviewed after the game and he's having to respond to what's happened when his evening should be about the joy of his full debut.

"But I certainly heard when Danny Rose was booked and it's unacceptable. I've spoken to our players individually. We've got to support them. We will report it.

"But I think that reporting is already in place because so many people in other areas of the ground have heard it. I believe the UEFA delegate also heard it.

"So, our part will be to make sure that process is followed, but more importantly for me is that the players in the dressing room know that as a group of staff and as an organisation we're there for them. That's the most important thing."

Southgate added it was "clear to everybody that there were comments made" .

When asked whether he should have taken the players off, he replied: "I'm not 100 per cent certain that that would be what the players would want.

"There would be a mix of views, in terms of when we've discussed the topic in the past, how the players would like it to be dealt with. And they just want to play football.

"Of course, we have the chance to have an impact, but I don't have the answer, frankly.

"I'm sitting trying to find the right balance of my disgust and recognising the differing views of the players in terms of their experiences of the past.

"I think my role is to support and protect my players as much as possible, first and foremost, is to speak in the position I am in the right way.

"Beyond that, maybe that's something I'd have to consider in the future. I have to say, it wasn't something that came to mind at the time.

"I would want to have a long discussion with my players before to make sure that was a course of action they felt was a) something they wanted to do, and b) thought was something that was going to make a difference."

"I'm reflecting on should I have done more?" Southgate added.

"In the end, I think I tried to protect my players as much as I possibly can. I'm not the authority on the subject. I'm a middle-aged white guy speaking about racism.

"It's not something that I really have... I'm just finding it a really difficult subject to broach because I want my players to enjoy playing football and not be scarred by the experiences.

"If people feel I should have done more, then I can only apologise for that.

"I have spoken out constantly against the subject. I have supported all the education programmes in our own country.

"I think I manage every player as well as I possibly can, regardless of which club they're from, what their roots are."
Click to expand...

Hope the UEFA official follows up and sanctions imposed.

I predict a fine of almost 12p

I predict a fine of almost 12p
Click to expand...

With the Sun and Daily Mail writing articles appalled at the abuse.... hmmmmmm....

One of the grubbier things about this is that his manager and a senior teammate both said he shares some responsibility for the abuse.

He'd had every touch booed throughout the match, then scored a late goal and celebrated by just standing there arms half-raised towards the Cagliari fans.

Boss Massimiliano Allegri and defender Leonardo Bonucci said Kean should take some of the blame for his celebration.

"He shouldn't have celebrated in that manner," said Allegri. "He is a young man and he has to learn, but certain things from the crowd also shouldn't be heard."

Italy international Bonucci - who scored the opening goal - told Sky Sport Italia: "You celebrate goals with your team-mates. He could have done it differently.

Guess Juve won't be walking off the pitch in response to racism any time soon.

This kid is nineteen, FFS, and his manager and teammate haven't stuck up for him. Twats.

As bad as racist chanting, according to his boss and teammate.

Aside from all the other bullshit, I really hate this "they should take it but not give it" bollix. Sure, you'd hope players wouldn't be dragged as low as some fans and/or give exactly back in kind, but celebrating in front of people who have been barracking you all game? Only fair, in my opinion.

As you say, for a 19-year old to have to put up with that and then not be supported by his team, it's infuriating and disappointing in equal measure. Twats, indeed.

Just reading further comments, some utterly crap responses which suggest they really don't get it.

Manager said:
You need great intelligence to deal with these situations and should not go to provoke people.
Click to expand...

The home side's president, Tommaso Giulini, blamed Kean, who has scored two goals in three games for Italy, for his celebration.

"I heard mostly boos, if they started making animal noises then we were in the wrong," he said. "What happened at the end was because of a celebration which was wrong and it would have happened with any other player."
Click to expand...

Danny Rose on racism: Tottenham defender 'can't wait to see the back of football'

Already seen people giving it the ol' "for £X a week they should put up with it".
G

Lord Camomile said:
Already seen people giving it the ol' "for £X a week they should put up with it".
Click to expand...

Here's what they mean:

Ex-Chelsea player says racial abuse 'destroyed me as a person'

Something has def changed over the last few weeks - so many (high profile) black footballers standing up and breaking the closed shop mentality of not criticising fellow players. Ian wright calling bonnuci a pussio being the best for me. It's pan-european too.
Last edited: Apr 5, 2019

GarveyLives said:
Here's what they mean:

Ex-Chelsea player says racial abuse 'destroyed me as a person'

Free-talking Danny Rose worn down by racism and ready to leave the game
Click to expand...

Glad to see Prem racism being reported by the press even if it gets largely ignored by the TV.

On one of the breakfast shows they had a very quick chat about this:
Cup final abandoned 'after racist abuse'

I couldn't help think yeah but what about talking about the big clubs where it only gets reported if it's caught on screen and there is a Twitter storm.

Gordon Strachan compares the abuse Adam Johnson would get if he returned to the abuse of black footballers.

The 'tiny wee scotsman' has become a bit of a dick in recent years. Actually, he may have been one all along.