i quite like newcastle so i hope they don't take terry

It is going to be Bruce

Former England boss Sam Allardyce says he turned down the chance to return to Newcastle United as the club's manager.

This is big sam that got the boot by Ashley when he took over the club and got a wedge to walk. His villa in Spain was bought with his payoff and he christened it St. James’s villa as a tribute

christ on a fucking bike.

Bruce is a safe pair of hands

Only £5m compo as well

Is this some sort of NE England equality thing where he repeats his fuck up at Sunderland? (Win % less than 30).

Sheffield getting 5m for releasing Bruce. Party time in steeltown. I wish I had no emotional investment in this, I really do. It’s as if the owner has decided that managed decline in a way of repaying the punters for the abuse he has got over the years. Rofl

He has signed. What a fantastic day. It’s champions league next season for sure. Great news. Utterly fantastic.

3 nil down vs wolves in China.what a time to be alive

To be fair Wolves 'away' is a tough game for any side. 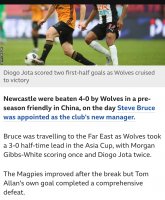 Good win against the Hammers, Bruce is turning things around already.

Newcastle boss Steve Bruce is weighing up a move for striker Andy Carroll. The 30-year-old Englishman is a free agent after being released by West Ham in June.
Click to expand...

Badgers said:
Good win against the Hammers, Bruce is turning things around already.

It's a non-starter unless he's available for the loose change down the fat man's sofa. Free agent, you say? Charnley's got big in the trousers already.

Can we resist a player who named his son Wolf Nine? Apart from the poor discipline record? Ignore the plague of injuries? The subterranean scoring record? I mean, here's a striker who's managed 34 goals in seven seasons in all competitions at West Ham, and his strike rate was scarcely better at Liverpool and Newcastle...

Andy Carroll is like the nice motor sitting in a driveway, which is difficult to start and the engine breaks down a lot. It drinks a lot of fuel, and the brakes are intermittent. Bodywork - so-so. The sticker on the window says 'cheap'. You can buy it, park it on your driveway and invite passers-by to admire it and applaud your purchase. And after a few years, after it's scarcely shifted a gear, you'll pay someone to drag it to the scrapyard.

Obviously, he's a shoo-in at NUFC.

Would be better off getting in a couple of youngster imo

Andy Carroll gave himself whiplash when he scored that overhead kick vs Palace.

He once injured himself playing table football.

He can barely walk these days.

He might have only scored 34 goals in 7 seasons but he only played about 50 games in that time as well.

I can't believe a club is even talking about signing him.
P

If Newcastle sign Carroll it's like Bruce has read this thread title and taken it as a challenge.

How much has Carroll earned for sitting on his arse at home not playing? He must be close to top of the list for that.

Collymore is not a Bruce fan

Badgers said:
Collymore is not a Bruce fan

Bruce offers football from the 1980s - his Newcastle appointment makes me angry
Click to expand...

"While Bruce will probably keep Newcastle up, it won’t be pretty."

Badgers said:
Collymore is not a Bruce fan

Bruce offers football from the 1980s - his Newcastle appointment makes me angry
Click to expand...

Try finishing higher than 22nd in league 2 for starters.

Did think Sol was not the best example

When Carroll suffered an attempted robbery, he hit about ten cars while trying to flee. Ferguson would have got out and hit the robber.

Mike Ashley - allergic to due diligence.

The 30-year-old, released by West Ham this summer following a six-year spell blighted by injuries, is expected to sign a one-year contract.
Click to expand...

With his injury record, a one-year contract is borderline giggly-gas optimism. The daft plank will be in parts by Saturday.

It's pretty funny watching some of the toon fans trying to convince themselves this is a good idea.
P

tommers said:
It's pretty funny watching some of the toon fans trying to convince themselves this is a good idea.
Click to expand...