And just like that we are up to 16th. Though Billericay are just below us and have 3 games in hand 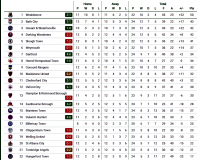 roll on Braintree at Champion hill

If we win that, that would be nice

And the 2-1 defeat at Home was our first Boxing Day defeat since 2000.

Kearney has scored in each of his 4 starts for Dulwich.

Laurie hill said:
Let’s have a hungerford rather than an oxford or maidstone!
Click to expand...

Thankfully we got a Hungerford with our second three goal away win in eleven days. Only four of the starting XI from Hungerford started here, and I have to say the team selection appeared to have a hint of rolling the dice and hoping something useful came up. Chapman at right back, Barnes on his wrong side while Nathan Smith sat on the bench, and two wingers and two strikers plus Vose, all of which looked a bit lightweight on paper. However we set up in the closest I've seen all season to a simple 4-4-2, which I always feel is the best starting point when things have gone a bit pear-shaped and you need to get back to basics.

We weren't especially scintillating, for the first half hour we didn't look any different to the first half hours of the recent home games against Hampton, Dartford and Billericay that all ended with the disappointment of dropped points. Ultimately though, we did what we needed to do at the back and ruthlessly took our chances. We led after 34 minutes when a deep cross from the right was beautifully volleyed back across goal and in off the post by Ainsworth. Three minutes later Mullings took advantage of an opponent's stumble out on the left touchline to barge past, cut inside, then square the ball across the goal area for Kearney to slide home at the far post.

We even survived our customary shaky start to the second half not once but twice, effectively having a second "half time break" of twenty minutes when the linesman went down with a painful looking injury ten minutes after half time. For much of the second half Hampton had a lot of the play and pinned us inside our own half, which is to be expected when you're two goals up away from home, but Hamlet defended solidly and didn't look too much like cracking under pressure. Then with around 15 minutes to go Vose got free on the left and crossed low into the centre for Clunis to arrive unattended and slam the ball home for a third goal. One minor irritation was Clunis' failure to convert a further chance near the end when great work by Kearney set him up for an opportunity that a natural striker would have devoured, but as is his habit he wanted to work the ball onto his favoured right foot allowing the keeper to close him down and block the shot for a corner.

A word for the PA announcer who was on fire throughout, giving us "Qwahday Taylor", "Nyreen Clunis", "Jefferson Monakana" and a pronunciation of Ijaha that defies my ability to interpreti it in writing, as well as remaining heroically upbeat and jocular despite his team's heavy defeat.

Football never fails to surprise! After a rather pedestrian start (both teams looked like they had been out on the piss) and with an unusual formation set up, I was worried but full credit that was an excellent performance in the end!

And the first time in ages that we’ve made some really good tactical subs.

Ainsworth had a quiet game bar doing the business with the goal but think we looked more dangerous with nyren. A well created second with mullings playing to the whistle and crossing nicely to Kearney - he is definitely all action!

Better from quade in midfield but standout was the new centre back. Strong header of a ball and quietly dealt with everything - sign of a good player. Vose and nyren had decent second halves. Not a big chapman fan but he played well at right back and Barnes better at left back! Everyone was solid including keeper. Monakana looking sharper again. And we’re definitely just a bit more composed with chrisitan smith playing - think he’s been our best player this season.

Now please don’t mess up Saturday - we’re
due some goals at champion hill! If we can beat Braintree and Chippenham then should be out of trouble and can maybe play more freely.
A

Laurie hill said:
standout was the new centre back. Strong header of a ball and quietly dealt with everything - sign of a good player.
Click to expand...

Debrah was excellent. Hard to believe he's only 19, he plays with such authority. You don't expect someone of that age to come in and be able to organise a defence from the off, but he did. A natural leader. Would be great if we could extend his loan spell beyond a month.
You must log in or register to reply here.
Share:
Facebook Twitter Reddit WhatsApp Email Link
Top