I thought it might be an idea to start a general thread for Brixton history, and to get it started, here's a photo of Atlantic Road in Edwardian times.

I researched some of the shops in the picture - more here. Seeing this photo reminds me of how much Electric Avenue has fallen from grace.

The same decline is seen in residential streets in Brixton.

Some of those forced onto the mill gained a fame of their own. Among them was John Dando – the Oyster Eater.

He feasted on what he couldn’t afford, touring London’s eateries, consuming huge quantities of food then refusing to pay.

He ate anything, though shellfish was his weakness. In Brixton he had to be separated from the other prisoners whom he robbed of bread and beef.
Click to expand... 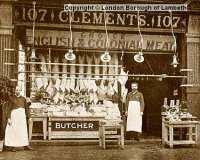 This is opposite the white horse pub and is now the locksmiths.

And here's the white horse pub.

Can you tell from the picture whether the White Horse offered rooms?

Because Vera Brittain lodged at a White Horse while nursing wounded WW1 soldiers at King's.

Im sure a lot of pubs/inns did offer rooms then, Seeing as the pub was on the London to Brighton road im sure it would have. When i was a kid there were watering troffs(sorry bad spelling) outside many pubs so the horse could have a drink too!

Superb. Must be there then. Will raise a glass to her next time!

leanderman said:
Superb. Must be there then. Will raise a glass to her next time!
Click to expand...

I would love to go back in time(for a while) and live in those environs.

does anyone have / have easy access to a kelly's directory (or similar) that includes stockwell road?

i have something i'm trying to pin down.

(i expect that lambeth's local studies unit will have one, just haven't got round to going there yet)

This is the memorial at Stockwell in 1921. 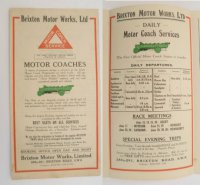 Brixton Motor Works leaflet from the 1920s.
It's on eBay for £25 if anyone wants it.

Royal visit to Brixton April 29th, 1908 for the opening ceremony of the town hall. Look at the crowd!

Lambeth Town Hall
In 1904, shortly after the constitution of Lameth Borough Council, a site for a Town Hall on the corner of Acre Lane and Brixton Hill was purchased for £25,000. (ref. 140) A competition was held for a design for the new building and there were 143 entries, (ref. 141) that of Septimus Warwick and Herbert Austen Hall being chosen (Plate 36b). The builders, whose tender was for £38,274, were Messrs. John Greenwood, Ltd. (ref. 142) The foundation stone was laid on July 21, 1906, by the Mayor, Alderman F. A. Powell. In a cavity under the stone the Mayor placed a sealed bottle containing a copy of The Times, a map of the borough, a list of the members of the Council and its committees, and some coins. (ref. 143) The hall was opened by the Prince of Wales on April 29, 1908. (ref. 144) The clock in the tower was the gift of Edwin Jones, J.P. (ref. 145) In 1937–8 the original architects were employed to build an assembly hall fronting Acre Lane and make other extensions including an additional storey to the existing building. (ref. 146)

Footage of Brixton market in the 1960s
http://www.britishpathe.com/video/caribbean-market

Life is a horizontal fall.

moon said:
Footage of Brixton market in the 1960s
http://www.britishpathe.com/video/caribbean-market
Click to expand...

Amazing. Funny to think that little girl in the pram at the end is probably about the same age as me.

SarfLondoner said:
View attachment 50498This is opposite the white horse pub and is now the locksmiths.
Click to expand...

Just as well they no longer exist, or they'd have been forced to change their window display after complaints from concerned parents.

I found some nice pics on here,,http://www.ideal-homes.org.uk/lambeth/lambeth-assets/galleries/brixton/brixton-estate

Some old footage of Brixton in this,,,

A little feature on the old Fire Station in Ferndale Road. 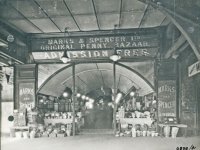 Do you know what number that arch was? That needs a 'then and now' comparison!

Ah, I'd already researched that!
http://www.urban75.org/brixton/history/marks-and-spencer-station-road.html

Enforced Holiday
Banned
Unable to find that ornate gate on that infernal quiz thread but i found a Brixton zebra.
http://www.urban75.net/forums/threads/quiz-where-in-brixton-is-this.311955/page-10#post-13056544 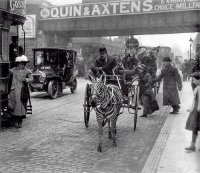 I added that piece on the original M&S.

editor said:
I added that piece on the original M&S.

at "London & S Western Railway" though... Think you may have got your (overhead) wires crossed...

at "London & S Western Railway" though... Think you may have got your (overhead) wires crossed...
Click to expand...

What should it be?

Don't monkey with the buzzsaw

It doesn't answer your question but I read this interesting passage recently in a book called 'Dwellings of the Philosophers':

"Hostelries [in the middle ages] often put up a golden lion fixed in heraldic pose, which for the traveller seeking out accommodation, meant that 'one could sleep there' because of the double meaning of the pun and the image" (the pun is Lion d'Or becomes 'lit on dort' (bed that one sleeps in).