Violence breaks out at bell-ringing competition in Devon village

Man kicks off over gay pride gnome at Asda

Yes, but it's Plymouth. 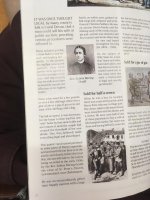 Thoughts and prayers for the residents of Chipping Sodbury

This one's pure Devon. Man steals tester pots of perfume and runs into the sea with them to thwart law enforcement:

Anyone missing a van ?

As I grew up on the Barbican in Plymouth was intrigued to see this.

From November this year start of celebration,

The Mayflower 400 events programme will share the values of migration, tolerance, freedom and democracy and tell the story of a ship and its passengers - a group of people that a remarkable 30million+ US citizens have descended from.
Click to expand...

I do remember Americans turning up to see the Barbican.

The mind boggles that 30 million were descended from them.

I kind of thought American Indians didn't see the Mayflower in this way.

Pensioner shell-shocked to discover an egg inside his egg

Pensioner shell-shocked to discover an egg inside his egg
Click to expand...

These are truly the last days.

You can get boxes of double yolk eggs....

The epitome of sensational

rubbershoes said:
The epitome of sensational

From Exeter's "One" magazine* 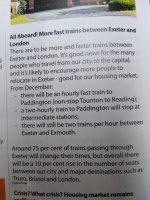 * In the very loosest sense of the word

Weirdly it was a conservative councillor who proposed the change.

Idaho said:
Weirdly it was a conservative councillor who proposed the change.
Click to expand...

Entirely inkeeping with the basic tory project of ruining everything.

Pensioner shell-shocked to discover an egg inside his egg
Click to expand...

Mr Jones has a boiled egg on Monday, Wednesday and Friday one week, and then on Monday, Thursday and Saturday the next depending on whether he visits the Halberton Lunch Club.
Click to expand...

This is a fairly mundain article but I did note this bit:

"The 45-year-old, of Selley Walk in Bishopsworth, stole:

Actually in Devon we have had a few significant crimes (one actually not legally a crime as it turned out) We had the case of Alexander Lewis-Ranwell who went on a rampage one day in February and brutally killed three very old men. He was found not guilty of murder by reason of insanity. I will comment that I found parallels between his case and that of Darren Pencille (who was found guilty of murder) in spite of showing obvious sign of insanity .. I could not help but note that Pencille is black and working class whilst Lewis-Ranwell is white was educated at a public school, played polo and is from an upper middle class background. Another case is that of Holly Strawbridge who has been found guilty of encouraging her 15 years old son (who died as a result) to use class A drugs. Whilst Devon is not the crime capital of the UK in proportion to its population it probably has a similar level of crime to many other more urban parts of the UK much of it driven by high levels of unemployment and the resultant frustration and sense of hopelessness. We also have a significant number of homeless rough sleepers .. I would guess that in Torquay (where I live) we have at least 25 rough sleepers. A visit to Exeter will reveal a large number of rough sleepers and likewise a visit to Plymouth will reveal the same.

Never mind the GE, in Taunton last week it was all kicking off in Wetherspoons, as a turkey shortage put an end to Christmas Dinner.

Spoons runs out of turkey and can't serve Christmas dinner

The crow has become something of a local celebrity