Magnus has made such a difference, too. Double serving of humble pie for me, please.

Substitutions were spot on today, needed more strength in midfield which Fergie provided, Sheriff was a nuisance against tired legs and Onovwigun played a big role for goal with his physical presence. As already mentioned massive performances all over, Quade was MoM for me with his covering of midfield, Green electrifying, Magnus and Chambers commanding, Dipo and Thompson hardworking up top. Will sleep happy tonight!
B

sankara said:
I can hear B.I.G screaming on the radio commentary
Click to expand...

You said it first

PartisanDulwich said:
We played confidentiality and could have scored even more
and considering recent home performances an amazing attendance
2,353
Good buzz today

We always win when Scutta comes from Hamburg
Click to expand...

Kudos to the stewards for making the Welling fans take down that hideous sectarian flag.

That had bollocks and brains and energy. And that’s all you need really. Great game.

baleboy_93 said:
Substitutions were spot on today, needed more strength in midfield which Fergie provided, Sheriff was a nuisance against tired legs and Onovwigun played a big role for goal with his physical presence. As already mentioned massive performances all over, Quade was MoM for me with his covering of midfield, Green electrifying, Magnus and Chambers commanding, Dipo and Thompson hardworking up top. Will sleep happy tonight!
Click to expand...

∆∆ this∆∆
I don't think Quade missed a header all game.
For a change we managed to get most of the second balls too.
Brilliant performance all round!

cambelt said:
Kudos to the stewards for making the Welling fans take down that hideous sectarian flag.
Click to expand...

Genuinely shocked to see that and the army surplus gear they were wearing - against all we stand for. Wonder what had happened to it? Those of a certain vintage recall the infamous BNP bookshop in Welling - no club should sully its hands with fans like that
D

That Welling flag was actually impressive, I had no idea you could fit so much awfulness on one flag

That was a world away from the shambles at Hampton just four weeks ago, the first game after the transfer listing of six contracted players had been announced, so credit to the management for identifying where changes needed to be made and to the players for making those improvements happen. Hamlet played with two proper strikers as Akinyemi joined Thompson in attack in a sort of fluid 4-4-2 formation, with the strikers and wingers dropping deeper or pushing up at different times. Unlike at Hampton, when it would have been difficult to name someone who played really well, there were no passengers at all yesterday as everyone played his part in a cohesive and effective team performance that restricted the visitors to few real chances.

Hamlet wasted one early chance when a pass slipped out to Akinyemi on the right was fractionally overhit and he miscued his shot across the face of goal. Welling managed to open up our defence shortly afterwards when a forward was played through with just Edward to beat but our keeper rescued us with a vital save. Just before the quarter hour a slick through pass from Thompson released Green, popping up in the inside right channel, and a great touch switched the ball onto his left foot before he fired emphatically past the keeper to give us the lead. By now Hamlet were playing with a confidence that has rarely been seen since St Albans were impressively beaten at Imperial Fields three months ago, although we didn't add anther goal until the final five minutes when substitute Sheriff received the ball to feet near the penalty spot and did well to shake off his markers before turning sharply to shoot into the bottom of the net. Welling's keeper had kept them in the game with an incredible one handed save to keep out a stunning first time shot by Akinyemi, but now it appeared to be game over. As was the case in our last victory on Boxing Day there was still time for a tense finish when Hamlet's lead was cut with just a minute plus stoppage time remaining, a low cross into the goalmouth producing a scramble in the six yard box with the ball ending up in the net. However despite a minimum five minutes of added time being indicated we held out for the win without too much trouble.

The back four looked solid, Taylor and Vose displayed a perfect blend of strength and creativity in the half back positions, Clunis and Green gave us the pace and thrust on the flanks, and Thompson and Akinyemi offered power and mobility up front combined with good touch. And of course Edwards was his usual reliable self in goal, despite one marginal but potentially costly mistake when he came to the edge of his box to deal with a through ball and, reaching forwards, snatched it slightly outside the 18 yard line. All ten visiting outfielders crowded around the referee, who had already given the free kick, in what can only have been an attempt to have our goalkeeper sent off. Whilst the free kick had to be give assuming the linesman called it correctly (he was right in line) the keeper could have headed it away with other teammates close enough to help him, so it was clearly an error of judgement as to where the line was rather than any intent to deny a scoring opportunity.

drachir said:
That Welling flag was actually impressive, I had no idea you could fit so much awfulness on one flag

I didn't see the flag myself, but it's a bit much to describe

No idea what nationality you are but frankly I take umbrage at people trying to portray my national flag as somehow awful or shameful. I wasn't born yesterday, I know there are bigots or extremists who seek to hijack our nation's emblems for their own "awful" cause, but it's the emblems and words they use to deface the flag that are the problem not the flag itself, and I'm not having it that a union or St George flag shouldn't be acceptable.
C

It was the no surrender and Rangers logo which made it unacceptable, and I don't know why people are so happy allowing a legitimate charity to be hijacked by right-wing racists. The message was clear, it wasn't a pleasant flag and i haven't seen anything like it at Champion Hill before.

Pink Panther said:
Welling's keeper had kept them in the game with an incredible one handed save to keep out a stunning first time shot by Akinyemi
Click to expand...

Was behind that save. It seemed frankly amazing in real time - looking forward to seeing the replay to confirm!

PartisanDulwich said:
Hate sectarianism - But nothing wrong with hope for heroes (and we have held collections for) - only prob is like St Georges flag and poppy attempts to high jack them -
Click to expand...

Because people have allowed the right wing to try and hijack them. As soon as a poppy is worn or flag is shown people question the motives and chuck comments about

I'm glad Hamlet isn't bedecked with Union Jacks and England flags. Like it or not, it can send out a very unwelcoming message to some members of the community.
D

It really was a wonderful day. Great performance and atmosphere. Best I've seen since we've been back.

And it was a lot of fun. 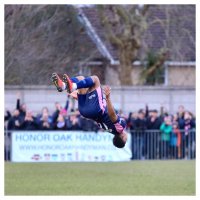 Pink Panther said:
I didn't see the flag myself
Click to expand...

I'll keep an eye out for that fleg. Do good to scoop up my dogs offerings with.

WillClunas said:
I've always enjoyed his wardrobe, including his non-wearing of the apparently league-mandated Jako blue t-shirts when we played there in the season opener.
Click to expand...

So should Preston have gone?
B

Cyclodunc said:
So should Preston have gone?
Click to expand...

Not according to the rules of the game.

To be fair the owner of the flag on twitter does refer to himself in his twitter handle as a Welling season ticket holder, a proud protestant, supporter of Rangers and Linfield and retweets in defence of Stephen Christopher Yaxley-Lennon - who knew