hash tag said:
We ended up in The White Hart again, with at least 3 veggie options; a without meat burger and a nut roast which were both good and halloumi. Portions too big for puds.
Click to expand...

That place has improved in recent months

The food in Reunion is fine and the garden at the back as lovely as ever.

hash tag said:
Was up at the triangle at the weekend and discovered that Domali's has sadly closed. It was a good place to visit even if they were not sure
what they were doing; vegetarian, with fish and more lately meat I think. fwiw, they should have stuck to being pure vegetarian, that would
have worked. Vegan is raging at the moment and there are not even that many pure vegetarian places around. Certainly room for another
one or two veggie places out there?

That is indeed a shame, more than once I went in for their BCM - beans, cheese and marmite on granary toast

Sitting on the bock of the day

discobastard said:
That is indeed a shame, more than once I went in for their BCM - beans, cheese and marmite on granary toast

Yes, I used to like that! BCM is very easy to replicate at home and became one of my favourite working-from-home lunches.

I enjoyed Domali occasionally when I worked in CP. Also liked the enormous veggie sausage and salad sarnies. That was a frighteningly long time ago though...

Guineveretoo said:
That place has improved in recent months

The food in The White Hart is really good. We go about once a month for the quiz and I've never had a duff meal there

colacubes said:
The food in The White Hart is really good. We go about once a month for the quiz and I've never had a duff meal there

I’ve had several duff (vegetarian) meals there over the years but, as I say, they’ve certainly improved.
G

Guineveretoo said:
Yeah - I think they got that whole refurbishment/relaunch wrong - they never seemed to be busy after that, although they still did vegetarian food. I used to go there quite often when it was mostly vegetarian, but was put off by the way that they not only stopped being pescatarian, but also "banned" buggies and closed the garden.
Click to expand...

I'm the same as you. I used to go there quite a bit years ago when I was working nearby and then occasionally after and it was always busy. I've no idea why they decided to relaunch and the whole buggy-gate thing when they seemed to be doing fine.

colacubes said:
The food in The White Hart is really good. We go about once a month for the quiz and I've never had a duff meal there

Really? I hate it. They're a total chain (Mitchell and Butler like the Commercial in HH) and it's all out of the freezer and then microwaved etc. Treat yourselves and try the Sparrowhawk some time.

I used to like the White Hart but got fed up of the relentlessly crap veggie menu options.
C

Any long term residents of Crystal Palace able to help?

The dinosaur area in the park used to have a mock up "lead mine" and several caves with (fake?) stalactites etc which people could go in. Best info I've got is that these closed in 1993 - presumably due to safety.

I would be interested in hearing what they are like inside if anyone has been in them in the past. Surprisingly I can find no photos or much information online - no Urbex etc!

Thanks to anyone who can help!

The Robert Elms show (hosted by Jason Rozam today) is all about Crystal Palace on today's show.

Quicky retunes. The park is brilliant if a little neglected. The dinosaurs

Crystal Palace Festival starts today. It looks smaller than usual, but still quite a lot going on.

Maggot said:
Crystal Palace Festival starts today. It looks smaller than usual, but still quite a lot going on.

I think we'll pop in at some point. Out today but maybe this evening or tomorrow afternoon.

tommers said:
I think we'll pop in at some point. Out today but maybe this evening or tomorrow afternoon.

Also tomorrow, there's a market in the Crystal Palace subway. Worth going just to see the amazing subway.

19sixtysix said:
I aways thought Penge-sur-Mer sounded better. The lack of sea is no bar given Wigan has a pier.
Click to expand...

High Empress of Dressing Up

I drove past this cordon earlier, about 4pm. Fuck these cunts with guns. A fucking high street in the middle of the afternoon? How dare people take their ridiculous, inflated sense of importance into a public place.
G

I heard on the news that he accidentally shot himself!

According to media reports:

One witness said the intended target stood over the man filming as he lay fatally wounded.

Two men wearing balaclavas are then said to have shouted 'He shot himself, he f****ing shot himself,' before fleeing the scene.

Desperate paramedics fought to save him at the scene but he was pronounced dead five minutes later.

A 56-year-old woman who witnessed the incident, said: "He came to shoot someone else, but he ended up shooting himself.

"After it happened, the boy he came to shoot stood there filming him."

A shopkeeper on the high street said: "A group of guys were sitting in a car by the [Lloyds] bank and a big guy came up to them with a shotgun.

"They all got out of the car and ran so the guy decided to damage the car with the back of the gun.

"As he was hitting the windows the gun went off and he shot himself - that's what we've been told."
Click to expand...

gaijingirl said:
I heard on the news that he accidentally shot himself!

I read he aimed at a car window and it bounced off the window. Bullet proof glass?
A loss of any life is sad, but, isn't it ironic!
G

"... How dare people take their ridiculous, inflated sense of importance into a public place ..."
Click to expand...

Increasingly, the taking of this "ridiculous, inflated sense of importance into public spaces" is no longer limited only to those with access with firearms.

In the latest example of bizarre police-speak, the Metropolitan Police have declared this Sunday afternoon shooting in broad daylight as "non-suspicious":

Hopefully, when the inquest into the killing of the Late Reece Marvin Ramsey-Johnson is opened on 26 September 2019, we will all hear exactly how "non-suspicious" this all is:

GarveyLives said:
This is the late Ayodeji Habeeb Azeez, aged 22, from Dagenham, who was stabbed to death in Samos Road, Anerley on Sunday 4 November 2018. 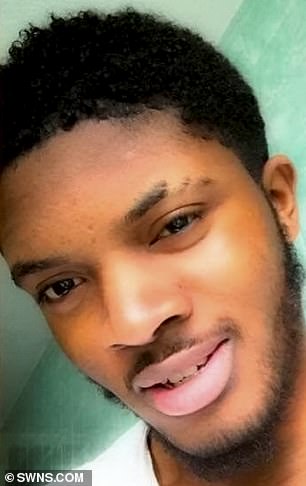 ​
Police and paramedics were called to at around 12.30pm. Mr Azeez was pronounced dead at the scene at around 1pm.

Detectives launched a murder investigation and appealed for witnesses.

Detective Chief Inspector Mark Cranwell said: “This attack took place in the middle of the day, in broad daylight in a residential street. It goes without saying that this incident would have stood out in what would normally have been a quiet environment.

“It appears that four or five male suspects were involved in the attack; both they and Ayodeji were seen to run into Samos Road from Grace Mews. By this point Ayodeji had been attacked. The suspects fled in one direction while Ayodeji went the other way before he collapsed.

“I am appealing to anyone who was in the area on Sunday afternoon and saw this attack, or the events surrounding the attack, to come forward and speak to police. This includes trying to establish if anyone was with Ayodeji when he was attacked.

“My officers are making progress as to why Ayodeji was in the area, why he came to be attacked and who was responsible for his murder, but we need information from the public to assist us in keeping the momentum of this investigation moving forward.”

Two men - aged 19 and 21 - were arrested on suspicion of murder on Sunday evening and both have been released under investigation.

I think that any witnesses or anyone with information about this killing should contact the incident room on 020 8721 4054. To remain anonymous please call Crimestoppers on 0800 555 111. You can also tweet police via @MetCC
Click to expand...

"A teenage girl lured a young man to his death over Snapchat in a plot to steal his BMW, the Old Bailey heard.

The 17-year-old is accused of “tricking” 22-year-old Ayodeji Azeez into driving to a car park in Anerley, southeast London, where he was ambushed by a group of young men ..."
Click to expand...

Ayodeji Azeez murder trial: 'Teenage girl lured man to his death on Snapchat in plot to steal his BMW'

Bromley Council is seeking a design team for a £2.5 million restoration of the Grade II*-listed Crystal Palace Subway in south London

Bromley Council is seeking a design team for a £2.5 million restoration of the Grade II*-listed Crystal Palace Subway in south London
The multidisciplinary team selected for the estimated £275,000 contract will design and deliver a major revamp of the disused tunnel, which once connected the Joseph Paxton-designed 1851 Crystal Palace to a nearby train station.
The project, planned to complete in 2022, is the first stage of a wider plan to transform the subterranean structure, which is on the Heritage at Risk register, into a cultural venue to boost local tourism. The subway was built to link Crystal Palace (High Level) railway station with the Victorian landmark, running underneath the busy A212 road. The station closed in 1954, 18 years after the palace burned down.
In its brief, the council says it wants to appoint ‘a conservation architect-led multidisciplinary team with experience in managing the restoration of listed historic structures’. The team will ‘repair, restore and conserve’ the subway so that, in the future, it can be transformed into a commercially viable cultural events venue.
‘The overall aim of this project is limited to restoring the building, in line with recommendations made by Donald Insall in 2014, and removing the structure from the Heritage at Risk Register,’ the brief states. ‘The delivery of this project will enable the council to re-open the subway to the public. The Subway then has the potential in the future to become a new cultural destination supporting tourism in South London.’
The Crystal Palace was originally built in Hyde Park before being relocated to suburban Sydenham in 1854. It was destroyed by fire in 1936 resulting in a drastic reduction in rail traffic.
The train station was closed and later redeveloped for housing leaving the subway intact beneath the roadway. The current initiative follows a campaign for its restoration by the Friends of Crystal Palace Subway.
The winning team will deliver the project from RIBA Stage 0 through to completion. Bids will be evaluated 60 per cent on price and 40 per cent on quality.
The deadline for applications is 28 February.

The tunnels are beautiful and do open once or twice a year. When I was last down there, people were talking of opening a cafe down there.
The article above mentions £2.5 restoration and £275,000 contract?
You must log in or register to reply here.
Share:
Facebook Twitter Reddit WhatsApp Email Link
Top