It used to be a great stadium, well ahead of its time when it was built - an early example of cantilever roofing at a British sport stadium. I used to watch athletics there in the late 70s and early 80s. Steve Ovett, Brendan Foster, Kathy Cook, Shirley Strong, Geoff Capes etc.. and Seb Coe before he became an arsehole. Saw the women's high jump world record broken there. Good times.

It's a shame the plan to take Crystal Palace (the football club) back there didn't come off. That's where they started, of course.

TopCat said:
I lived nearby and wanted to support the camp and its actions. Some right funny people rocked up. Some not so funny odd types too.
It was sweet with punk next to old lady at the tea table.

Bromley council have been running down the whole park for decades. Desperate to build fucking flats in there.
Click to expand...

It was a constant problem that people would turn up wanting to help and be put off by the spiky people who were around - who were usually not necessarily the productive ones who were off building treehouses but randoms who had just turned up themselves.

However, they did win.
M

wiskey said:
I have it in my head it's so they could judge synchronised swimming.
Click to expand...

Here is a nice atmospheric video featuring synchronised swimming through the round windows & some good views of the pool... (a minute or two in)

Beach volleyball every night seemingly whatever the weather.
Last week a guy was out wearing just shorts...living the dream 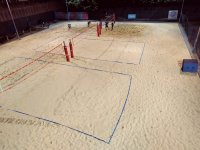