Carlton Tavern in Carlton Way, Kilburn is demolished with no warning and without permission

The machine operators were likely misled by the developers.

Either that or they were wankers.

David Clapson said:
I note from the Standard that CLTX has a UK planning consultant - this bloke Kieran Rafferty https://twitter.com/krplanning
All he tweets about is football. Perhaps urbz would like to ask for his views on pub demolition?
Click to expand...

One on one? You're crazy.

David Clapson said:
As the developer, CLTX Ltd, is Israel-based, can he just wind up his UK subsidiary and avoid his responsibilities?

I note from the Standard that CLTX has a UK planning consultant - this bloke Kieran Rafferty https://twitter.com/krplanning
All he tweets about is football. Perhaps urbz would like to ask for his views on pub demolition?
Click to expand...

funnily enough he has now protected his tweets

marty21 said:
funnily enough he has now protected his tweets
Click to expand...

One on one? You're crazy.

I tweeted him anyway

He's on LinkedIn https://www.linkedin.com/profile/view?id=38431992&authType=name&authToken=pae3&trk=mp-allpost-aut-name and here are his email and phone http://planningonline.southwark.gov.uk/DocsOnline/Documents/392751_1.pdf

9 July 2016
Developers who knocked down a 1920s west London pub shortly before it was to be given listed status must rebuild it, an inquiry has ruled.
Westminster City Council told developer CTLX, which owns Carlton Tavern, it must rebuild the pub "brick by brick", after it was unexpectedly demolished.

CTLX had refused to do this and appealed the council's decision.

But a five-day inquiry by the Planning Inspectorate found in favour of the council.
Westminster councillor Robert Davis said he was looking forward to the Carlton Tavern being turned back into a "thriving community pub".
"This sends a clear message to developers across the country that they cannot ride roughshod over the views of local communities," he said.

The Carlton Tavern was demolished in April 2015, in breach of planning laws and in spite of the fact it was being considered for Grade II listing.
Click to expand...

On Monday they did the same thing with Brookland's College in Ashford (Middx.) Knocked it down after the council had refused them permission to do so.

These fuckers that get ordered to rebuild, I assume they just go bust? If so it is possible to go after directors of even Ltd companies that have gone bust. Would be interesting to see if any council does as this kind of shit seems to be happening more often...

I never thought it would happen, but the rebuilding is apparently almost complete. 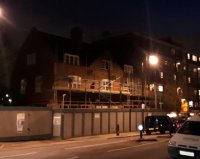 Yossarian said:
I never thought it would happen, but the rebuilding is apparently almost complete.

I pass it quite often and they’re taking their fucking time about it but it’s getting there. It’ll be interesting to see how they fit it out. Another scumbag developer nearby bought The Clifton pub to turn into flats. There was fierce opposition from the locals which went on for a couple of years, during which time the developer ripped out the historical bar and interior. He eventually lost and had to put it back as a pub it now it’s got a cheapo, plain, boring interior.
Last edited: Mar 26, 2019

heckling from the back!

Glad to see Westminster Council had the balls to enforce the rebuilding, even if it is taking a long time

I'm hoping Lewisham Council take similar action over the Noah's Ark in Deptford, which was demolished in November...

The Greyhound in Sydenham did get rebuilt and is operating as a pub.

RubyToogood said:
The Greyhound in Sydenham did get rebuilt and is operating as a pub.
Click to expand...

19sixtysix said:
Not sure if it's open but the greyhounds are back outside (early last year)
Click to expand...

It's bloody beautiful. Fuck you, developers!

Though I don’t live in London anymore, that makes me so happy. I used to live not far from there and while it wasn’t quite my local, I have celebrated friend‘s birthdays there, etc. I was livid when developers illegally pulled it down and followed this closely. Long live the Carlton Tavern.

Fantastic. This can be an example that all cuntish developers who want to knock down century old pubs where people can, you know, actually talk and socialise with each other, for a few houses and a quick buck before fucking off, should be wary of.
S

It'll never be the original but looks like they've done an OK job from outside.

This was such a blatent unashamed act of vandalism by the developer and the arrogance of it showed just how toothless the councils usually are in such matters and that this is known by developers.