Living right next door to the little local Sainsbuggers is a truly psychotic and single minded cat
A few weeks ago he wrapped himself around my legs then ran to the door of the house next door, kept staring at the door and mewling pitifuly
Sucker that I am, I fell for it
I rang the bell, a man answered, said hello, then looked down as he saw the cat, he tried to block the doorway with a naked leg, the cat clawed said leg and attempted to jump over it
The poor man caught it in mid-air jump
The cat bit and clawed him till it escaped inside
"Oh I'm so sorry" say I " thought he lived here"
"Oh, its my cat alright" said the poor clawed chap
3 days later said Tiddles was again well friendly as I came out o Sainsbuggers, so I gave it a quick head stroke
It bit my hand then stuck its claws in!!!!
Since then I have seen at least 3 different employees from the shop trying to keep it out - total fail
Yesterday, it celebrated the opening of the new bakery next door by stealing a brown paper bag full of tasty shit from the rack below some poor womans pushchair, child laffing its head off, Mum did not seem to agree from what I saw...
Will try to get some video of Mental Puss - I have a rather sick admiration for its determination, Scared o Nothing - sod the real name, for me, it is now the Brockley Dreadnaught!!!!

wave a cucumber at it

Pickman's model said:
wave a cucumber at it
Click to expand...

Is this a tried and tested cat lure method I am unaware of?
C

Water pistol deters moggies. Maybe not that one, though.

hipipol said:
Is this a tried and tested cat lure method I am unaware of?
Click to expand...

I can see two Chuckle Brothers in that.

Is this the cat?

Cat saunters into London Sainsbury's and refuses to leave

Hmmmm, think this ones merely freaked out cos it thinks its shit has turned huge and green
Prob the react the same way mesel to such a revelation!!!!

Leafster said:
Is this the cat?

hipipol said:
Hmmmm, think this ones merely freaked out cos it thinks its shit has turned huge and green
Prob the react the same way mesel to such a revelation!!!!
Click to expand...

I think I have had a few of those moments over the years/illnesses!

Otherwise this sounds like my old dear departed cat - lived wild under my shed for a long time before coming-in and adopting me and for the first year, he was as likely to attack me as be friendly, then something changed and he was the best , most loving, one of thefamily cats you could hope to have. Except to strangers, who he still loved to terrify!

Oh my Radar is a bit like that, really really sweet and affectionate towards me, but a total nutter towards other people. I have to shut him in the bedroom whenever we have visitors because he goes a bit nuts and starts randomly attacking people, and I once had to prise him off my dad's head. He was clamped on like something out of Alien, and biting.
Last edited: Nov 22, 2015

knows how to use the three shells

i read about this cat last week - it's made the newspapers!
This stubborn cat really doesn't want to move from the sweet shelf in Sainsbury's
London animal of the week: The badass cat in Brockley Sainsbury's
Sounds like quite the badass - go Olly! 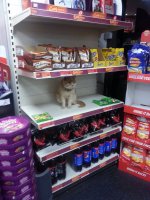 Our friend, Jamie, had a psycho cat that used to ambush people and piss all over the house. It trapped him in the toilet once and attacked his ankles whenever he tried to come out.

Jamie thinks the cat just fucked off one day. What actually happened is his boyfriend stuck the animal in a box and let it out at Membury service station on the M4 on his way to Wales to visit his parents.
Last edited: Nov 23, 2015

Orang Utan said:
i read about this cat last week - it's made the newspapers!
This stubborn cat really doesn't want to move from the sweet shelf in Sainsbury's
London animal of the week: The badass cat in Brockley Sainsbury's
Sounds like quite the badass - go Olly!
View attachment 79896
Click to expand...

That be the lad!!!
If only I'd known who he was I'd have had my scratch marks saved like an autograph!!!!

he ought to find a branch of sainsburys with a display of 'mog' toys and hide among them...

I am Noodle's bitch.

Orang Utan said:
i read about this cat last week - it's made the newspapers!
This stubborn cat really doesn't want to move from the sweet shelf in Sainsbury's
London animal of the week: The badass cat in Brockley Sainsbury's
Sounds like quite the badass - go Olly!
View attachment 79896
Click to expand...

"Instead of trying to disturb my Royal slumber make yourselves useful. The kitty aisle is over there. I require two bags of Dreamies, a multipack of cat milk and some dry AND wet food. And none of that cheapo rubbish, either. I'll know, so don't even think about it."

Badass cat is now the undisputed owner of this British supermarket

A friend once did house/cat sitting for me for 5 days whilst I was on my honeymoon.

I think on about day 4 I got a text message along the lines of "Your horrible cat who chewed through the phone cable has now stolen my glasses. Everything is blurry, I can't see my way out or even operate my phone properly. Send help".

(We found his glasses under the sofa btw, but he is quite visually impaired without them).

Short of breath hand held report from the frontline....
It seems that the cruel Human Olly allows to live in his house, has put a fucking BELL round his neck!!!
he already had been humiliated into wearing a collar, with a "Do not Feed Me" tag attached...
Now he has a BELL!!!
Seems he had developed some new tactics
When I saw him last week he was pacing around outside , with his new neck tag asbo bollocks round his neck, What I did not realise was that he adopted tactics well known to WW11 submarine commanders, smuggle yerself past the boom UNDER, normal traffic
It seems he was able to bend his legs to the point that he was able to enter the shop by running in UNDER a pushchair!!!!!

Fucking genius beast
Tonite, the manager wiv 2 assists, run out from the office, mgr saying "where is he?" - woman on till "who?" Mgr, "the cat, the fuckin cat" - woman on till "oh you mean my keys?" - " Mgr, " everytimr I hear jangling keys I think hes back"....
They all trooped back into office, looking disappointed, well that's my prob biased view
Other peeps in queue start saying " let him in, he's famous"!!!!!!!!!!
One woman, much enamoured and buying 50 lottery tickets (??????????????)
"he's got his own FB page, he's a "tourist attraction" Olly, TOTAL legend round this way

PS Its worth noting his brother, the grey twin, tends to hang about on the other side of Brockley railway station - he seems to prefer to watch the cab office and cafes........

Sainsbury's managers insist Garfield is still welcome in the supermarket's lobby area but the decision to ban the moggy from the travel agent's has sparked anger from his fans.

One of his Facebook followers said: "What nonsense! He is a cat and of course he will scratch – he is not a toy.

"The parents firstly should control their child and secondly not be so pathetic to complain.

"I will not buy a holiday from Virgin and will not shop in Sainsbury's if this is their attitude to animals. This is appalling."

Welcome to the Internet, how's your first day been?

Hardly a new madness.......
What Jeff Killed - whatjeffkilled.com
Jeff The Giant Orange Cat
I used to follow him and was fascinated by Jeff, the Giant Orange cat
Long gone, but for me and many others, not forgotten........
RIP Scourge of Rodents, JEFF G.O.C.

knows how to use the three shells

Jeff was rock hard. He even came home with massive snakes he'd killed.

waterintobeer – waterintobeer
He is as aggressive as ever - has drawn blood from the hands of unsuspecting punters a few times over recent weeks.....

The cat on that page has sadly died.