Private this, exclusive that, luxury this, red carpet that, model this, utter cuntbubble that.

Judging by his eyes one would be tempted to think he might have been higher there than Elon Musk's little convertible red car is right now.
D

I hope Dougald Hine and Spacemakers are happy that they've given LAP such a lovely windfall and turbocharged Brixton's gentrification. What do they have to say? In case anyone wants to ask them:
info@spacemakers.info
@_spacemakers
@dougald
Get In Touch
Dougald Hine

Well what do you know? 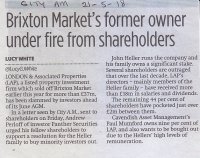 So it looks like the start of the end for the upstairs here too - rent increases ahead according to the Reclaim Brixton FB.
M

editor said:
Part of the self indulgent DJ Privilege Posse! They boast that they've been 'reinvigorating the London nightlife scene since 2012'.
Click to expand...

Have you tried booking them for an Offline?

mrs quoad said:
Have you tried booking them for an Offline?
Click to expand...

DJ Rich Cunt and His Over Privileged Pals on the decks! Keepin' it real.

snowy_again said:
So it looks like the start of the end for the upstairs here too - rent increases ahead according to the Reclaim Brixton FB.
Click to expand...

I've heard loads of artists are being kicked out of the studios. It stinks.

editor said:
I've heard loads of artists are being kicked out of the studios. It stinks.
Click to expand... 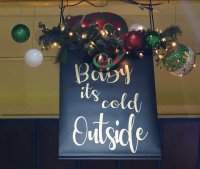 I think all the artists have been hoofed out now.
Still, we've got lots and lots of deejays now to help smooth the champagne and fromage down the gullet.

Big like for the grammar pedantry. Got to keep an eye on this sort of thing, thin end of the wedge and all that ;-)

So the new socialite rich kid owner is hell-bent on turning the Village into some kind of hot'n'happenin', music-pumpin' rival to Pop Brixton - apparently there's a recording studio coming up and there's going to be more DJs all over the place - but I have to say this bizarre kontiki-style DJ hut that gets wheeled around the place is a strange confection.

It's equipped with really high end gear but it just seems daft to me. I've never seen anyone dancing or interacting with the thing (perhaps I've just missed those moments), but it seems weird to have a full on DJ playing to the backs of a load of diners and foodies.

Interesting stuff here. Looks like my April's Fool piece wasn't that far out.

Lambeth council’s planning committee will next month consider plans that could lead to significant changes in the character of Brixton Village and Market Row – the large covered markets run by Hondo Enterprises that took them over last year.

The application was published as Hondo confirmed reports that it has purchased the Pope’s Road site adjoining Brixton Village that is now occupied by Sports Direct and Flannels. The planning application does not apply to this site
Click to expand...

The main effect of the proposals would be to allow later opening and changes in the current balance of traders in Brixton market – allowing up to half of all premises to become food and/or drink establishments, but setting this proportion as the maximum permitted.

Brixton Village’s 83 units are currently split 70% shops (58 units) and 29% restaurants and cafés (24 units); one unit is classed as a drinking establishment.

Hondo’s two linked applications seek “blanket permission” for all ground floor units and linked first floor units to have “flexible” use. They say that at least half of existing units would remain class A1 (shops) with no more than half of the units becoming class A3 (food and drink).

I've heard that it's going to be renamed back to Granville Arcade at some point, probably to give it some vintage appeal or something.

They;re describing this as 'Sustainable Fashion Event'. I can't say that's what I'd call it:

Note the use of Granville Arcade.

'Vendeur' goes rather nicely with 'Champagne & Fromage', no?

I think anything which encourages people to mend clothes rather than binning them and buying new is a good thing - who knows someone might go for the fizz and come out converted.

sparkybird said:
I think anything which encourages people to mend clothes rather than binning them and buying new is a good thing - who knows someone might go for the fizz and come out converted.
Click to expand...

I'd usually agree, but at £20 a pop this seems to be more about a fun, on-trend jolly for well-off folk rather than promoting actual "sustainable fashion," which is a "movement and process of fostering change to fashion products and the fashion system towards greater ecological integrity and social justice."

Sustainable fashion concerns more than addressing fashion textiles or products. It comprises addressing the whole system of fashion. This means dealing with interdependent social, cultural, ecological and financial systems. It also means considering fashion from the perspective of many stakeholders - users and producers, all living species, contemporary and future dwellers on earth. Sustainable fashion therefore belongs to, and is the responsibility of citizens, public sector and private sector. A key example of the need for systems thinking in fashion is that the benefit of product level initiatives, such as replacing one fiber type for a less environmentally harmful option is eaten up by increasing volumes of fashion products
Click to expand...

Still better than nothing, I suppose.

I'm my experience, poor people tend to mend their clothes not throw them away.

sparkybird said:
I'm my experience, poor people tend to mend their clothes not throw them away.
Click to expand...

People of all incomes will try and fix expensive items, but with the advent of Primark and dirt-cheap clothing, far more clothing is thrown away than ever before. Why do you think all the clothing street markets vanished from Brixton? Even they can struggle to compete on the pricing of essentials.

But however you spin it, a £20 fizz-fuelled two-hour jolly falls far short of most people's idea of 'sustainable fashion.'

Went past yesterday. There was a DJ playing directly to the posh grazers and bubbly quaffers of Champagne & Fromage. I'm struggling to think of a more soul-destroying DJ gig. 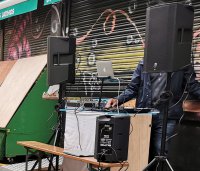 Gotta admire the amount of expensive kit though. Despite being approx 30cm from each powerful speaker, he has his own monitor set up too.

Left Of The Dial

None of the speakers are expensive. Mackies are about £500 a pair and probably the cheapest things you can get away with..apart from Alto, the monitor system of choice

twistedAM said:
None of the speakers are expensive. Mackies are about £500 a pair and probably the cheapest things you can get away with..apart from Alto, the monitor system of choice

Including the decks and mixer (both Pioneer), that's around a grand's worth of gear to play (quietly) in front of 20 people filling their faces with champers and artisanal treats. And the monitor is total overkill for such low audio levels.

And here it is.

440 capacity cocktail and beer bar with food brought in via an app.

Lost In Brixton, ‘a concrete jungle with drinks and food,’ opens in Brixton Village on 1st August 2019

editor said:
And here it is.

440 capacity cocktail and beer bar with food brought in via an app.

Lost In Brixton, ‘a concrete jungle with drinks and food,’ opens in Brixton Village on 1st August 2019
Click to expand...

This kind of thing makes me sick up a bit

High praise from the Tatler...say no more.

cuppa tee said:
High praise from the Tatler...say no more.
Click to expand...

So they're another big money backed venture:

Incipio Group, which operates London's Pergola food courts, has secured £5m funding to open six sites over the next 18 months - including its first outside the capital.
Click to expand...