Emery's second season - can't be as bad as the last one

august fixtures, couple of tasty ones in there

and astonishingly all on saturdays

Arsenal captain Laurent Koscielny has refused to travel on the club's pre-season tour of the US.

The 33-year-old France defender is out of contract at the end of the 2019-20 season and is a reported target for French clubs Bordeaux, Rennes and Lyon.

"We are very disappointed by Laurent's actions, which are against our clear instructions," said Arsenal.
Click to expand...

Arsenal have beaten Tottenham to the signing of teenage defender William Saliba from Saint-Etienne for £27m, on the day Real Madrid midfielder Dani Ceballos also joined on loan.
Click to expand...

Not a bad bit of business that 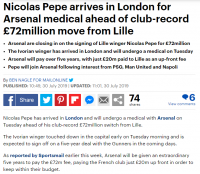 Rumours of Coutinho to Arsenal

What the fuck was he thinking?

a genuine importer of owls

I'm only posting this because I am bitter, twisted and gutted

Arsenal's best bit of business was selling Iwobi for £35m

Was a six pointer that

2nd in the table #emeryin 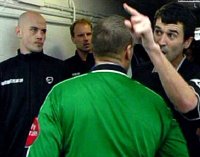 Been bottling it ever since.

Ok, loads of people have tipped Newcastle for the drop, and Burnley haven't beaten us for good knows how long, but that's still a very satisfactory start.
Good summer signings, that Ceballos truly looks the business...I'm even coming round to David Luiz

Arsenal's scant consolation in losing to Liverpool is that they have got their annual visit to Anfield out of the way early - and this defeat was not quite as harrowing as some suffered in recent seasons.

The statistics after this 3-1 loss, which left Liverpool with the only 100% record in the Premier League, lay like rubble around the feet of manager Unai Emery and his side.

Arsenal have conceded 25 goals in their past seven visits to Anfield. Since Jurgen Klopp arrived at Liverpool in October 2015 they have scored 26 goals in eight Premier League games against the Gunners - the most one side has against another in that period.

As a measure of Arsenal's progress and expectations this does not offer much optimism, despite it being an improvement on last season's 5-1 loss and the 4-0 defeat in Arsene Wenger's final season.
Click to expand...

It is not much of a consolation to say things were not quite as bad as the other times and Arsenal's excuses are wiped out by the fact the most grievous wound of all was self-inflicted by one man.

The biggest clue in their £8m signing of David Luiz was Chelsea manager Frank Lampard's lack of inclination to keep the Brazilian despite being short of experienced resources in central defence. He did not exactly offer to drive the 32-year-old to Emirates Stadium but it did not sound too far off.

The haste with which Chelsea appeared to be willing to send Luiz across London may have had some clubs smelling a rat but Arsenal took a very high-risk gamble.
Click to expand...

3-1 is not as bad as the normal thrashing at Anfield and it is under the belt now. Even if all results go against us today we will still be top six. Looking for some positives here.